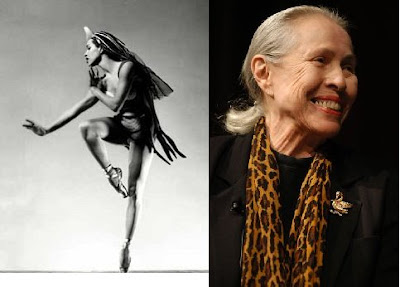 Originally posted on The Smart Set...Maria Tallchief is known around the world as the first Prima Ballerina in America. Born on the Osage Indian Reservation in Oklahoma in 1925, Elizabeth Marie Tall Chief, was the daughter of an Osage Father, Alexander Joseph Tall Chief, and Scottish/Irish Mother, Ruth Mary Porter Tall Chief. Tallchief was the Grandaughter of Eliza Big Heart. In 1953, Tallchief was given the name of Wa-Xthe-Thomba, meaning "Woman of Two Worlds." She was married to choreographer George Balanchine from 1946 to 1952 and later married Chicago Developer Henry Paschen in 1956. She started piano and ballet at age three and by age 12 she was studying ballet under the great Madame Nijinska. Tallchief performed with the Ballet Russe de Monte Carlo From 1942 to 1947 and the New York City Ballet from 1947 to 1965. Tallchief's 1949 performance of Balanchine's "The Firebird" in 1949 made her world famous and she was the first Sugarplum Fairy in Balanchine's Nutcracker. Tallchief retired in 1965 and started the Chicago City Ballet in 1981 with her sister Marjorie, also an acclaimed ballerina. At present Tallchief is artistic adviser to the Chicago Festival Ballet. Among many other awards and honors, Tallchief received the Kennedy Center Honors in 1996.