Ariel Tweto, from the Native Village of Unalakleet in Alaska, recently kicked butt on the ABC's new show Wipeout. Although I'm a bit embarrassed to admit I'm a HUGE fan of Wipeout, I really was out of my seat cheering on Ariel throughout the show. Not only did she kick butt throughout the first rounds, she was awesome in the finals!!! I think her attitude and personality were the best part though, you just want to give her a big hug. She not only represented Alaskans, she represented her fellow Eskimo people and Indigenous people around the world...and she had a blast doing it! From what I've found Googling Ms. Ariel, she's a cross country star and has her sights on a journalism and /or fitness-nutrition career. She was fantastic on the show so I bet we'll see more of her. 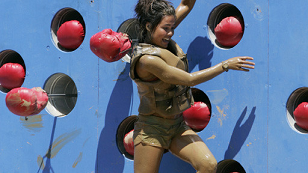