From NPR to Native Research Celebration

Wow, I had a busy day today...but I wouldn't trade it for the world. I started out by sitting down with KUOW's Weekday host, Steve Scher, to discuss sustainable style...can you be stylish and sustainable at the same time. It was my first time on radio so I was pretty nervous leading up to the show. Once I was in the booth though, it went great. I've been a fan of Weekday and Steve Scher for a long time so was pretty familiar with the format, a quick back and forth with Steve and then listener questions. Steve was right on it as far a touch questions. And the listeners were right on as well with great examples or suggestions themselves. Afterward, I got lots of text messages, emails, and voicemails from all sorts of folks, friends, family, and I guess I'd have to say brand new friends. In the end, I just hope I did well by SSFand everyone out there trying to live a bit more on the sustainable side. 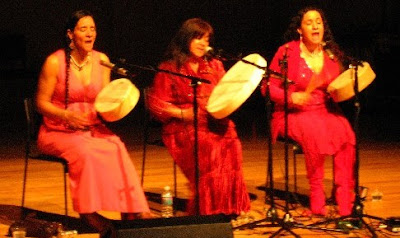 So that was the start of my day. The end of my day was spent at the launch of a new institute at UW called the Indigenous Wellness Research Institute (IWRI). It is an incredible new effort that will do incredible things and produce incredible results. But speaking of incredible. The evening blew me away. The ceremonies and lectures were inspiring and the performances were out of this world. Two performers in particular really left me breathless. Pura Fe completely amazed me. This woman should have shelves full of Grammies. Not that you can really describe her voice or style, but if you crossed Janice Joplin, Aretha Franklin, and Bonnie Raitt...you'd be close. The other great surprise was Kinnie Star, a young female performing artist from Vancouver. She started with some awesome poetry, did a couple more Top 40 type songs, and then ended with some Rap/Hip Hop that ROCKED!!! Now Don't get me wrong, the Black Lodge Singers and Keith Knight (a six string guitar player) were outstanding too, but the women really stole the show I must say. One of the final acts was Ulali, a trio of Native women (including Pura Fe) that I think could have easily, literally set the house on fire. They combine some traditional native sounds with etherial melodies that were food for the soul. Wow, what an amazing day!